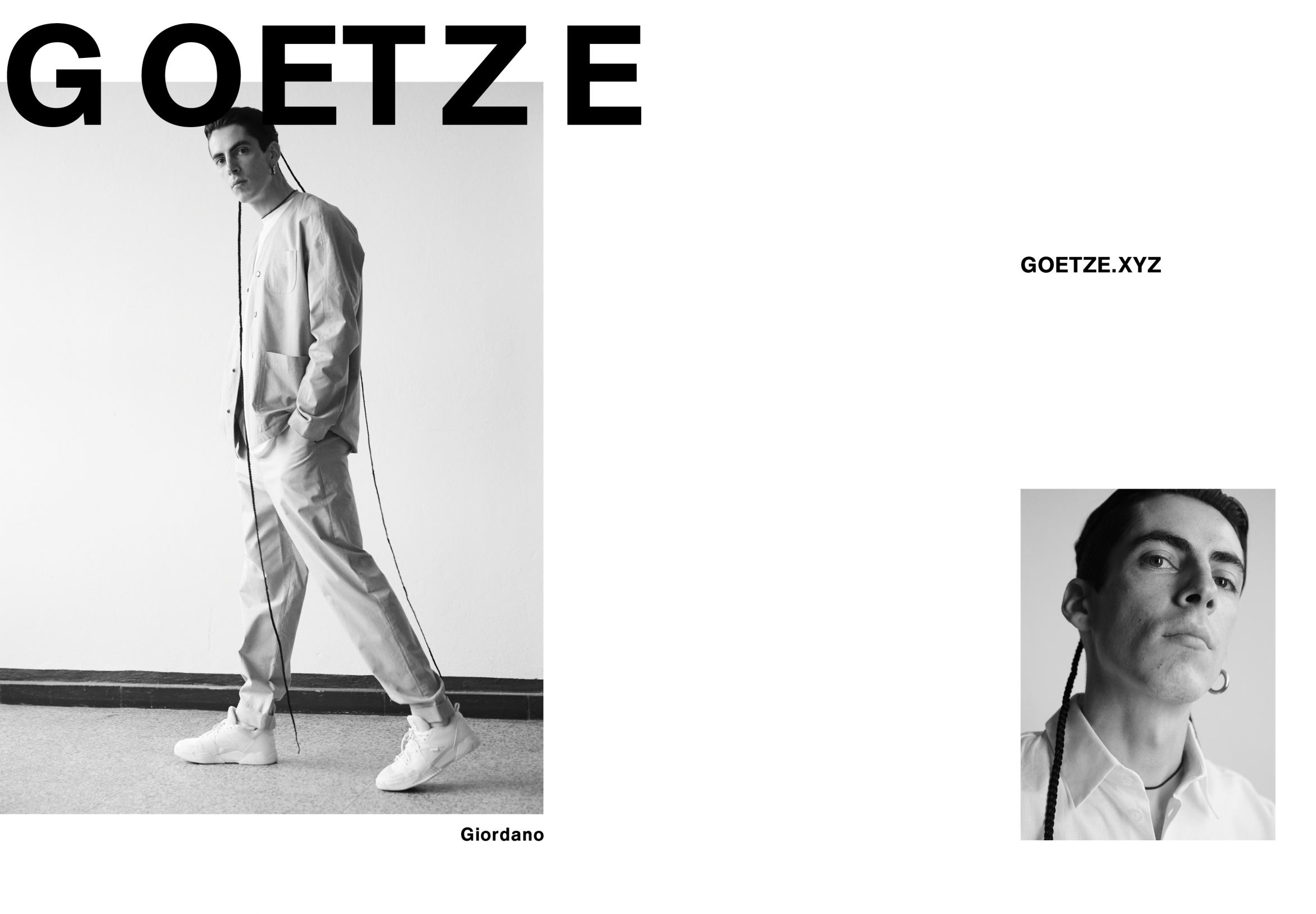 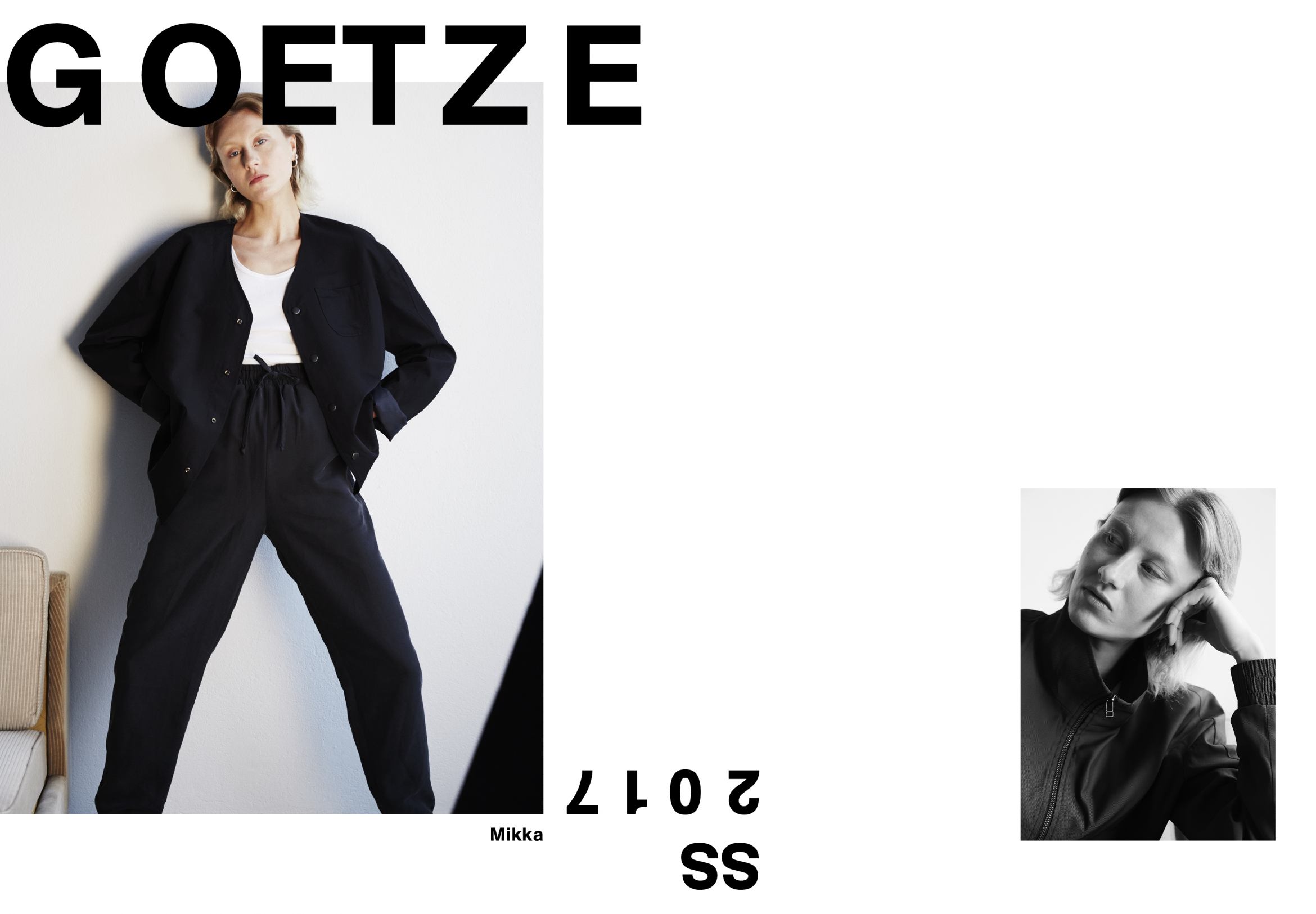 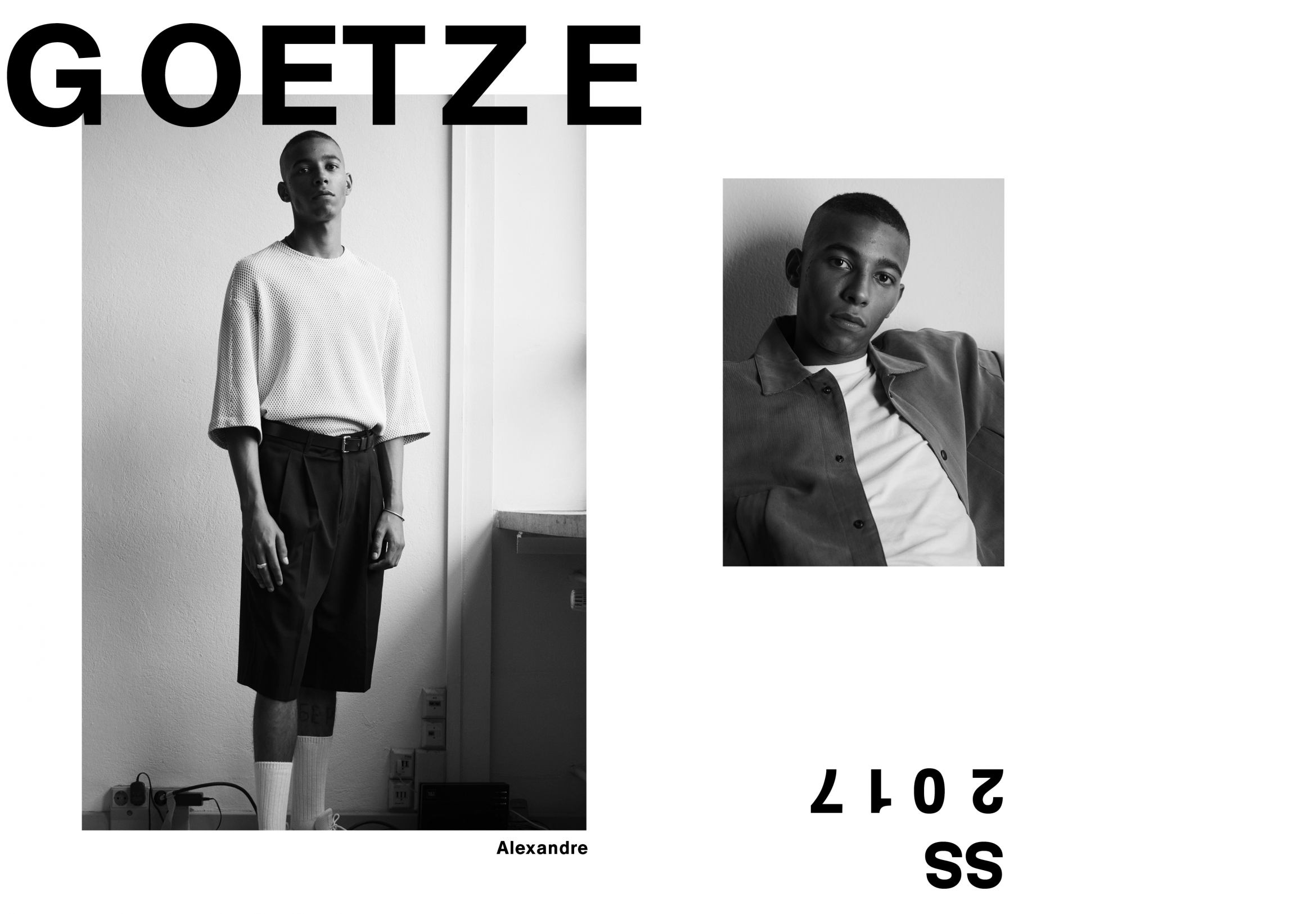 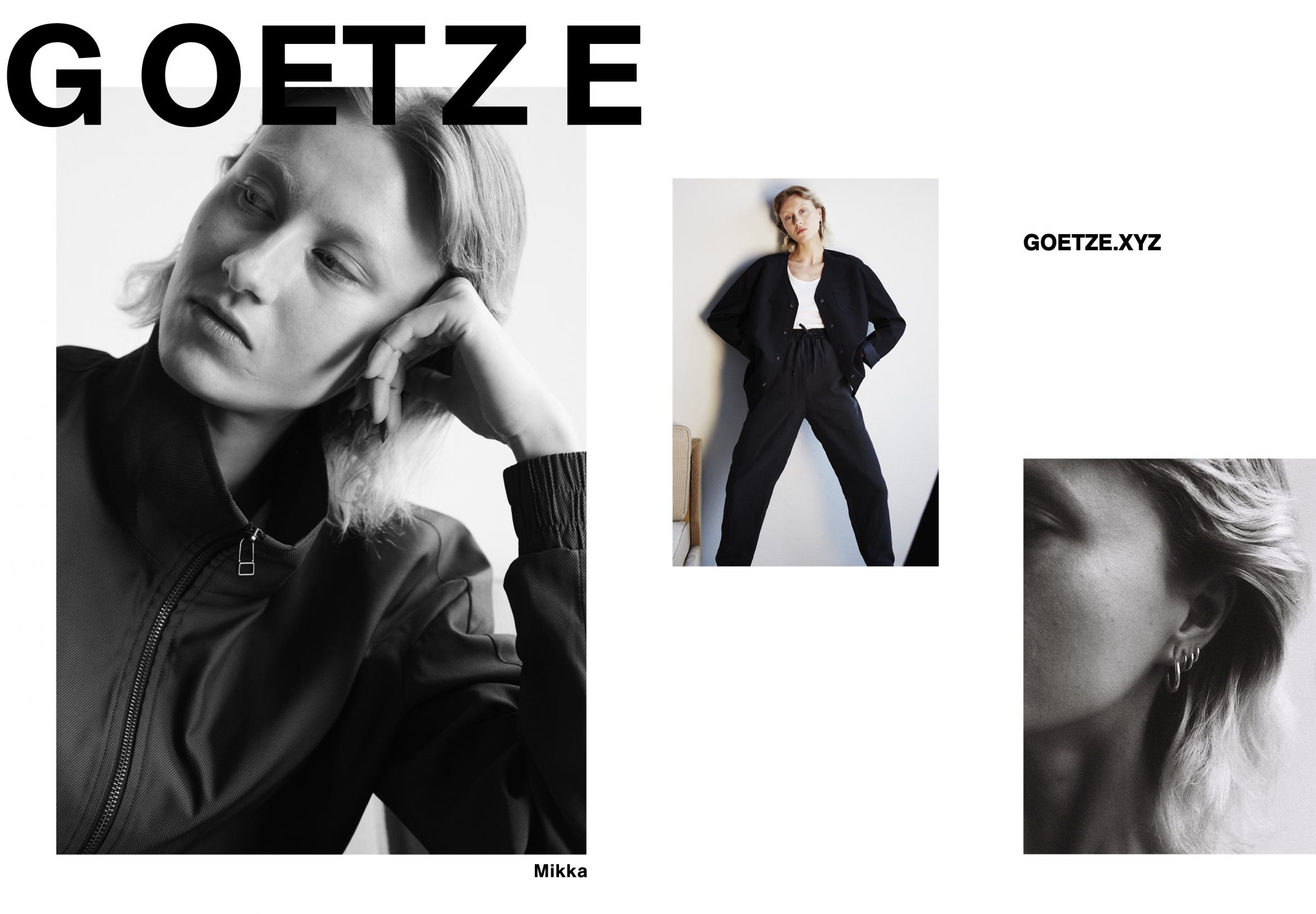 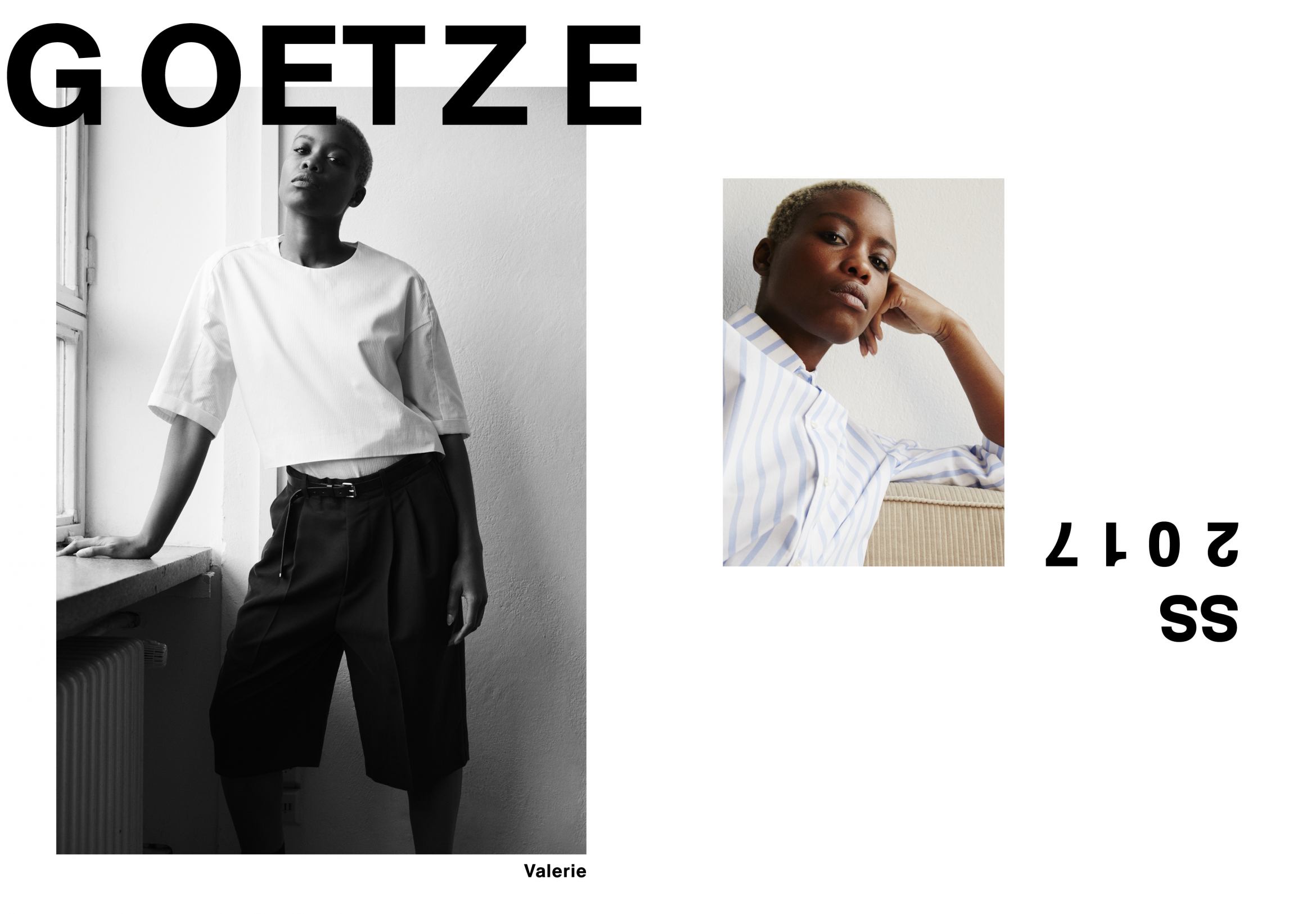 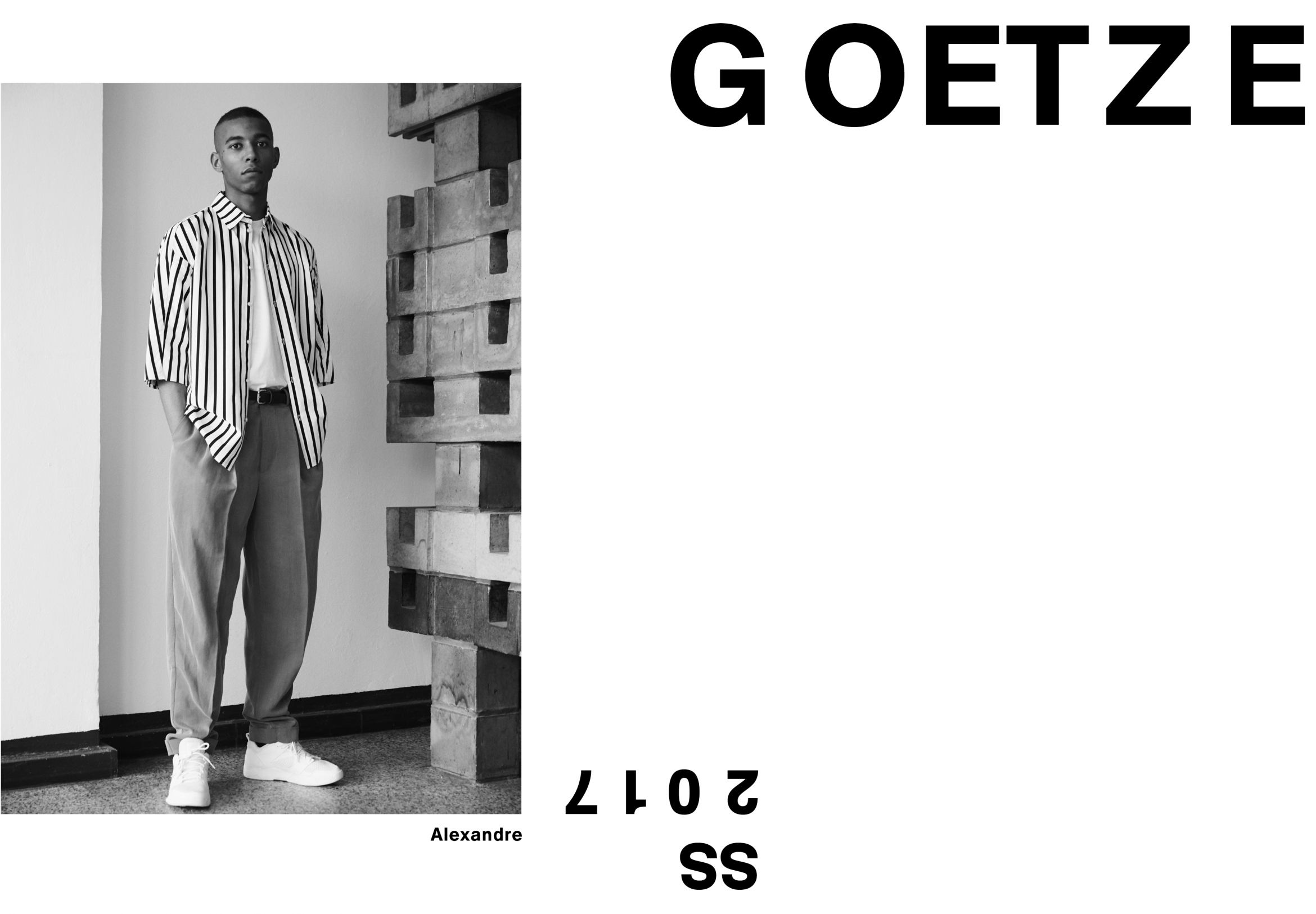 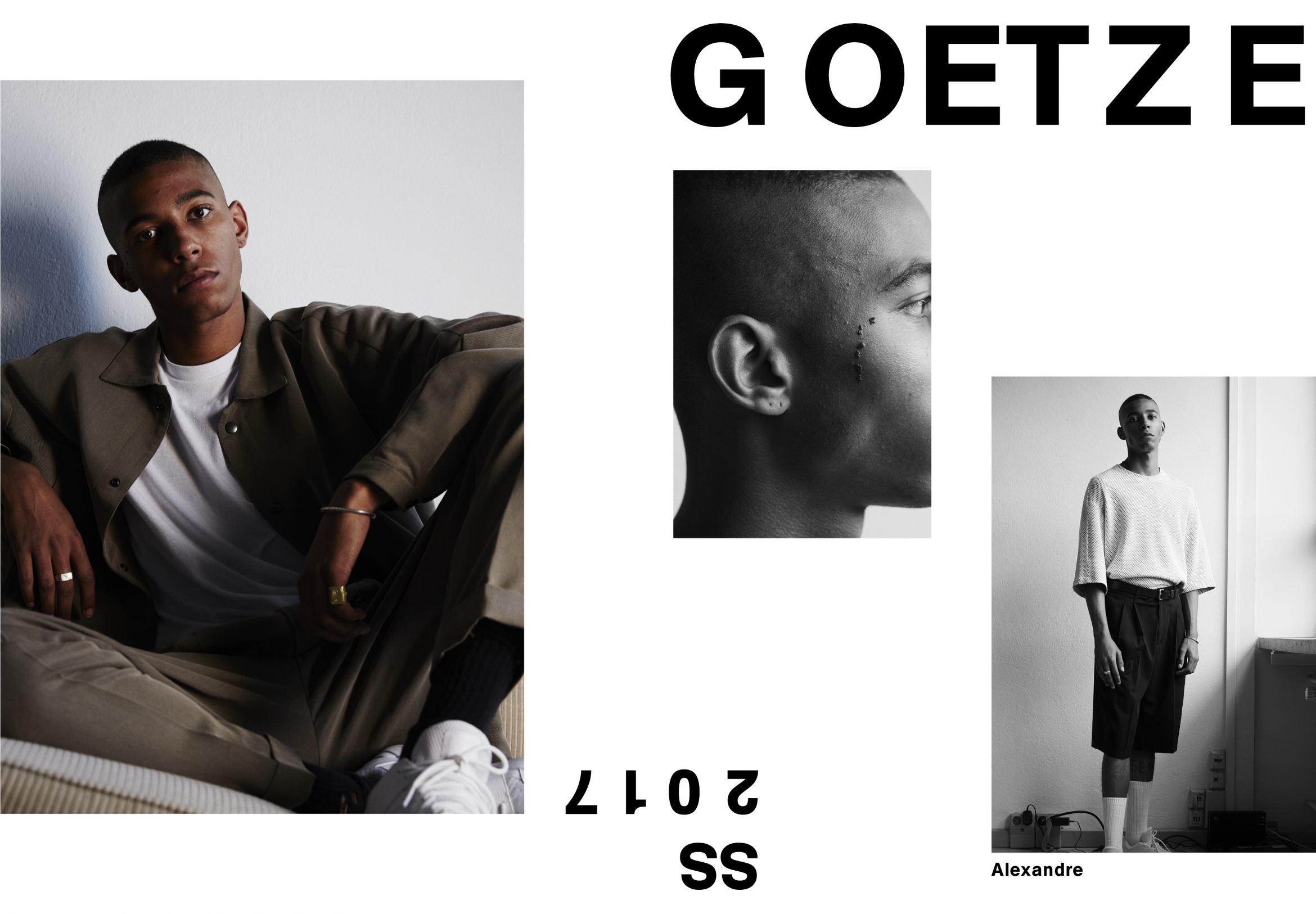 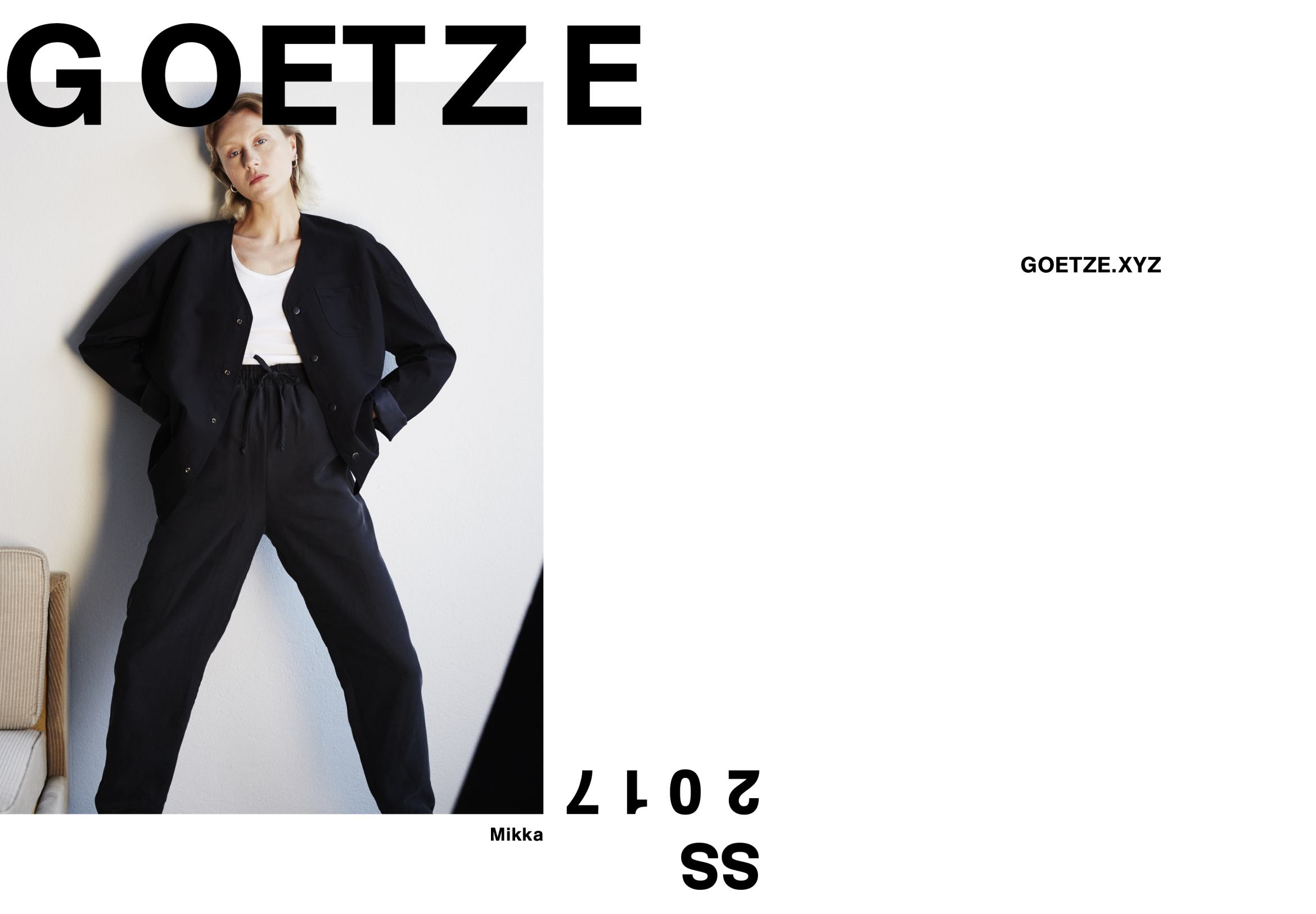 A smoothly running team re-met to shoot the G O E T Z E Spring/Summer 2017 campaign. In an exclusive interview stylist Christian Stemmler, photographer Roman Goebel and designer Sissi Goetze talk about how they met, about diversity and transparency and how it shows in their most recent project.


Sissi, Christian and Roman, you three have been working together on plenty of photo shoots for the label G O E T Z E. How did your work together come to life and how have you met?

Christian Stemmler:
We started working together with Roman for the fall/winter 2013 look book shooting.
I thought Romans more edgy approach with a great feeling for in-between moments and way he sees men would help the G O E T Z E image and it turn out to be a good match.

Sissi Goetze:
After I have already released a couple of seasons as an independent designer, Christian contacted me and offered support to sharpen the appearance of the label. He then proposed to work with Roman, who he knew from previous foto shootings. Together we work very closely developing the overall appearance of G O E T Z E. We value each others work and expertise. Our collaboration is based on honesty and trust, which is an ideal base for experimentation and for developing new ideas.

Roman Goebel:
Christian connected me with Sissi quite a while ago. We all get along well and everyone likes the work of the other - it just fits well.


Roman and Christian can you tell us a bit more about your background. What other projects are you working on at the moment or where does your personal interest lie in the field?

Roman Goebel:
I am a photographer. I like Sissi’s work and I am happy to support and try to push G O E T Z E further.

Christian Stemmler:
I’m a stylist and fashion consultant with a focus on menswear and editorial and I’m working a lot with young talents in fashion design and photography.
I develop concepts for magazine editorials, do castings and create visual languages for fashion brands.
I’m working closely with designers/brands to put together their collections for lookbooks, e-commerce, campaigns and fashion shows.
I’m fashion editor at large at German L’Officiel Hommes and also work with Berlin based brands Hien Le and Frisur.


What is your idea or vision about G O E T Z E, now and for the future?

Christian Stemmler:
We did the first genderless shoot for fall/winter 2016 and I would like keep going in that direction.
Classic wardrobe staples for men and women with a focus on shirts, trousers and jackets/coats
Rather focusing on a smaller stronger selection of styles and more experimenting with materials on carry-ons
Developing more cuts that fit both the male and female body.

Sissi Goetze:
Besides this I also aim for more transparency and closer interaction with my customers. The people modelling the product for instance are also people who wear G O E T Z E. I want as little distance as possible to my clients and develop designs that carry my signature and make sense to the people wearing it too. The recently launched online shop also turned out to be a nice tool to get in contact with customers and understand their needs and requests.


Sissi you are known for your minimal designs, pattern and proportion studies. This collection has a strong graphical element though. What were your thoughts on this when integrating the differently coloured stripes and net motif for instance?

Sissi Goetze:
At the core of the label lies the re-interpretation of classic motifs and garments, merging them, shifting them - making them more suitable for a contemporary context. I approached the theme of the stripes similarly since stripes are a common motive in classic menswear. I appropriated them in a way though that it would emphasise the pattern cutting of the designs, highlighting the seams and cuts by placing stripes of different strength next to each other or consciously not matching them when two seams meet. Let’s say it was rather a tool to highlight the pattern cutting than replacing it.


You three worked very closely on selecting the cast for this photo shoot. What did you aim for and who are the people you casted? Can you say something about them?

Roman Goebel:
We wanted to have interesting people that fit to G O E T Z E. Christian took the biggest part in casting - we worked with most of the people before. David and Mikka belong to the G O E T Z E family already.

Christian Stemmler:
Diversity is the main aspect.
But also finding people that don’t look like classic models, more men and women with different body types, ethnical backgrounds with different ages.
Most of them are friends and I or we worked with them before on other projects.


Every motif is taken on a different location. Where have you shot the campaign and how did you select the locations? Is there any particular narrative linked to it?

Roman Goebel:
The idea was to focus on the people and too much on the clothing. We wanted to have a strong portrait story. The first idea was to shoot inside and outside. Of course the weather was too bad in Berlin to go outside, so we did everything around Sissi’s office… perfect place - a typical Berlin office, a bit of DDR charm, nice hallways, weird art etc.

Sissi Goetze:
It was quite spontaneous really. We just moved the studio to a new location very close to Berlin Alexanderplatz. One can still feel the historical past of Berlin here and I believed it was a nice gesture using the immediate environment where we work in instead of renting a studio or external location. It just felt right, immediate and effortless in a positive way.


Some pictures are taken with a digital others with an analogue camera. What is the concept behind this?

Roman Goebel:
I often mix analog and digital. Gives you another perspective and makes it more dynamic somehow…

Sissi Goetze:
I really liked the outcome of mixing these two techniques. I somehow associate youth, desire, fleeting moments with the grainy texture of the analogue photos. The analogue photography has also been used to document the individual features of each model. It is almost a bit voyeuristic and creates an intimacy which is new for G O E T Z E, but very much matches how I re-approach the label.


In comparison to earlier campaign shootings of GOETZE the overall look seems to be more layered and opulent. What was your idea with regards to styling?

Christian Stemmler:
It’s not more layered and wouldn’t call it opulent.
I tried to make outfits that fit the individual person and wanted to show simple wearable looks.
For the personal touch we kept each models jewelry and hair style.

Sissi Goetze:
I guess the more layered outfit with the stripes gives the impression of a more opulent look. We stuck to very simple looks in reality though, as we did in earlier photo shootings too. I guess what we stopped doing since last season already is fight every single pleat that occurred. The more natural fall of the fabric and designs is something I really enjoy seeing now. I like the designs being more approachable now.